Stories from teachers and students in our schools

Technologies both good and bad - what to adopt, what to avoid

The other educators in children's lives

There is an underlying subtext that subversively sneaks in and out of my grade 10 history course this year.  It’s called reality.  Sometimes we call it the present day, sometimes it is just called news.  The textbooks we use and the Quebec programs call it the Contemporary Period (though more often than not that ends in the 1980s).  And occasionally a student will refer to it indirectly, without knowing, when she says, “Ah, I get it now.  That actually makes sense to me!”

I started the year off with one specific reality-related objective in mind:  I wanted my course to be relevant to a 16 year old, someone not quite in CEGEP but not quite out of high school either, someone in education/life limbo.  At that age many students are more concerned with their own personal world dawning, than with a fading sunset painted over a strategic cliff hundreds of years before they were born.  Based on a few conversations with them and with my own son, I surmised that one thing (well one other thing!) on a lot of their minds was how to search for their very first job.  And so, after having been inspired by a quirky little video, the first ray of reality-light in our classroom was that of the electronic ePortfolio. 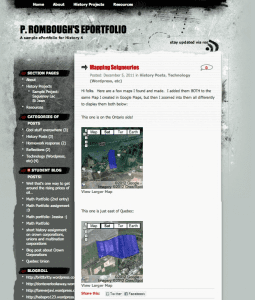 The idea was simple:  at the end of the year my students would have a long list of things they actually “made” to show off to prospective employers.  Not simply a resume, but an interactive collection of projects demonstrating a wide range of academic, social and technical skills and knowledge.  There are, of course, several ways of looking at an ePortfolio: as a showcase, mostly for parents and other students to see;  and as a reflective space, where students set goals, try things, and work out on their own how to improve upon themselves.  While all those functions of an ePortfolio were important to me, and indeed are part of our in-class practice, my hopes to our  online spaces as CVs necessitated two things:  one that their ePortfolios were public and thus exposed to real-world risks and responsibilities, and the other that their ePortfolios allowed for an extremely wide range of technology to be used.  After considering various options, and trying a few in class, we settled on using WordPress.com, a free online service with limited advertisements (actually none so far to date) and one that allows for a variety of uses by means of plugins and embed shortcodes.  Essentially a blogging platform, WordPress is also a website, a content management system, and a portal.  It also has the ability to act as a social network and to connect to other social networks, a way to let even more of “their world” to shine in.  So, where are we now?  Well, so far we have used the sites to blog on homework experiences, as a platform for writing for a real audience, and slowly but surely as a way to collect together our various experiments in using technology in a classroom setting.

And… a second objective for the year was just that, to incorporate technology.  I teach in an online environment (read more on that here) so immediately we had to master several skills in order to communicate, in order to share work and collaborate on projects, in order simply to read together and learn.  It sounds obvious — you imagine uploading and downloading and chatting — but every time any creative energy seeped into the room, we found ourselves bending and breaking the tools we had on hand.  Then like anyone would, we looked around to see what else we could use.

As part of our process, we wanted to build collections of resources, brainstorm characters and characteristics, map out and share intersecting trade routes, trace timelines, and sketch seigneuries.  For most of those tasks Google Docs and Google Maps allowed us to work together  with little restrictions.   Google Earth allowed us to tour the world together, and Youtube and Discovery Video offered seemingly endless windows onto the past.  But students these days don’t just take in information.  They know how to share it, expand upon it, work and play together in online building and gaming and socializing environments.  Nothing seemed natural, nor more naturally boring, about just watching a video together and taking notes.  We needed a way to meet up and interact.

Previously we had worked on various projects in Prezi, an online presentation tool that allows for virtually infinite zooming from one slide to another.  Then we discovered we could work “together” in the Prezi environment.  We could meet there, collect and classify objects together, all in real time.  We could work simultaneously on the same large territorial map, meeting one day over Gaspe to view a student’s work. 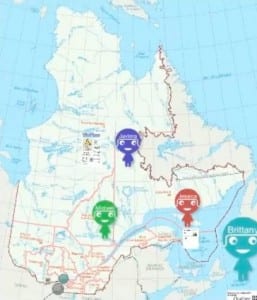 In the form of little avatars, we could bunch together inside a concept map of the early British colonial government, to exchange ideas on the first legislative assembly, divide up and connect the dots around who actually votes and doesn’t.  Students would virtually bump into each other, and suddenly learning was personal again, and fun.  It wasn’t the reality of a physical field trip, but it was their reality, the way they were used to socializing and living their lives.  For them it was real.

But given all that, what really made me think of reality as a topic for this blog entry was not my students’ job needs, nor their process, nor the technologies of today.  It came to me during a final culminating task for the economic development theme, where they each

had to put together a feature page in a newspaper.  The challenge was to use the local newspaper format to convince (or to dissuade!) a Chinese investor to set up a large-scale factory in a region in Quebec, and to draw not only on our history, but also on China’s, to draw comparisons.  As it happened, Steven Harper was in China at the time negotiating a trade agreement, China was in the news because of Tibet protests, and Apple factories in China were also being investigated for working conditions.  Suddenly my students were seeing history being played out in their world and in terms they were familiar with:  the Internet, Twitter, technology (but this time the kinds they owned and used).  Current issues such as the environment, deforestation, First Nations living conditions and the Plan Nord all came into play.  And real Chinese companies that had already invested in Canada elsewhere came under their scrutiny.

The students looked back on the past through the lens of the present, not from a fabricated or imagined present created, but rather from one that actually impacted on their lives.  They finally said, “I get it”, because they were able to first get it “now”, and then make connections.  And this wasn’t the only example that surfaced in our class this year.   We negotiated a homework schedule as the students in Quebec began their strike.   We learned about divisions in East Canada’s political system in the 1800s, just as a new political party was forming in Quebec.  And of course, we continued to set up and expand upon our own blog-styled ePortfolios, while privacy issues in Google and Facebook were evolving and becoming a concern, and while copyright and copyleft rights were finally on the table and big news.

Do they really get it, the now I mean, what is happening in the world today?  I don’t know for sure.   But what I do know is my students suddenly seem to get the history when their experiences, their technology and their news enters into the equation.  They suddenly see that history happened in someone else’s present, and that that present was not so different from their own.  They want to explore more, learn more, when that exploration includes their world.  That is, until another reality hits home and it hits home hard:  provincial exams.  You see, being in secondary 4, at the end of the year my students must sit down and demonstrate a prescribed set of “intellectual operations“,  use a specific “progression of learning” that is so embedded in the past and completely over-saturated with facts and examples from times they don’t know, well, suddenly I actually have to stop and teach it all to make sure they get it in time, and any chance of voluntary exploration on their own part just stops.  There is precious little time to look beyond and wander.  They are no longer historians in the making, they are students again.   Oh, we do practise useful skills:  We learn to write essays in an exam context, how to read questions, how to compare facts and to find answers.  But more to the point, we learn to recite all there is to know about our local and national culture, as if that is all there is to know.  Oh, don’t make any mistake about it, the exam is a powerful incentive to learn, now that my students all know that 50 percent of their grade hangs in the balance.  Reality hurts too.  Still, I can’t help but wonder how this reality will in any way be part of theirs when they finally leave limbo and begin to climb out and into their lives.

I will end with a real quote from my real-life 15 year old son when I asked him the other day, “Why do you think you are studying history anyway?”  He actually responded, in all seriousness, and with pride in his voice for having figured it out: “Well, then when you are at parties you can impress people, and in that way you can get a better job.”  He had a point I supposed.  What do you think?